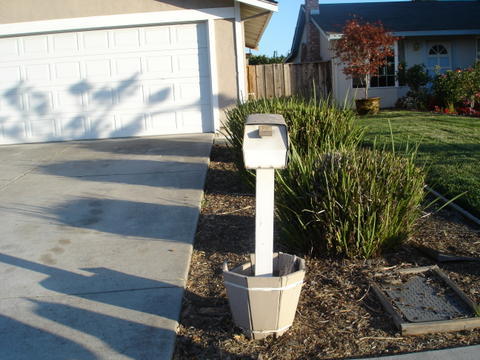 This could be our new mailbox

If you don’t own any of R.E.M.’s recent albums, well first, shame on you. But second, now is the time to start up your collection. If you’re like me, and I know you all are, then you love R.E.M. And if you’re also like me, and I know some of you are, you have a home theater setup with 5.1 Dolby Digital surround sound. Either way, I highly recommend getting into R.E.M. and/or getting a 5.1 system.

But more to the exciting news! Warner Bros. just re-released all of their R.E.M. albums (R.E.M. used to be produced by a company called IRS). So these new albums include the original CD and a newly remixed, 5.1 surround sound DVD- Audio disc. I purchased my first 5.1 album not long ago and gave it a listen this past weekend (Around the Sun is the album).

Amazing. That’s all I can say. Simply amazing. It sounds like you’re sitting in the middle of a room with different instruments all around you. Every sound is distinct and comes from a distinct location. It’s a very unique experience. Perhaps it’s not for everyone, especially if you already have their albums or do not have a home theater setup. But for the crazy fans like myself, it’s pure magic.

So, after the first one, I ordered 2 other albums from the least expensive place I’ve found, Overstock.com (Automatic for the People & Up).  I just received them yesterday and though I haven’t had a chance to listen, I know I will be very satisfied.